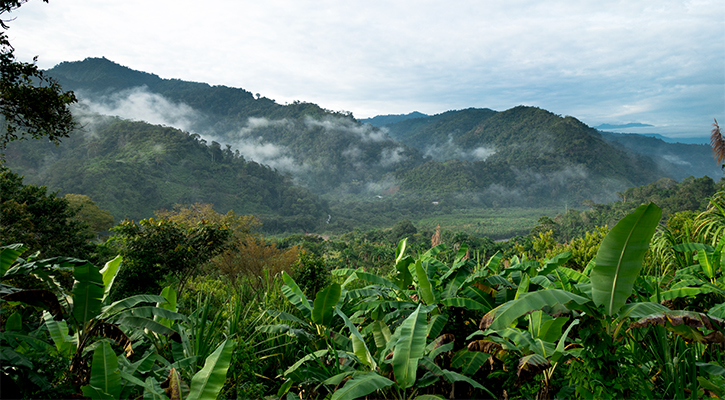 Maranatha volunteers venture all over the world serving others, but one project this year was even more of an adventure than most! A small group of volunteers and Maranatha staff members hiked deep into the dense mountain forest of southern Costa Rica. With support from local people, they carried all their own gear and the materials for two One-Day Churches for many muddy miles.

Stepping into the Jungle

The small group of volunteers hiked into the Chirripó region of the Talamanca mountain range, a protected rainforest. The area is inhabited only by indigenous people groups, and lots of wild animals like the giant anteater, dozens of snake species, and the largest population of jaguars in Central America.

The remote trek was steep and muddy. After first traveling for miles on the back of a truck and tractor, the group dropped the construction materials at the literal end of the road and took off on foot. They crossed a metal footbridge that led to a single file trail that had turned to mud from the rains. ‘I’ve never been challenged like that before. Then with the mud and … when there was no lights, when the sun went down and we were still walking in the jungle, that became a little bit scary!’ says volunteer Jon Harvey, of the strenuous hike. ‘I have been on three Ultimate Workouts with the young people. But this is the ultimate workout of mission trips!’ 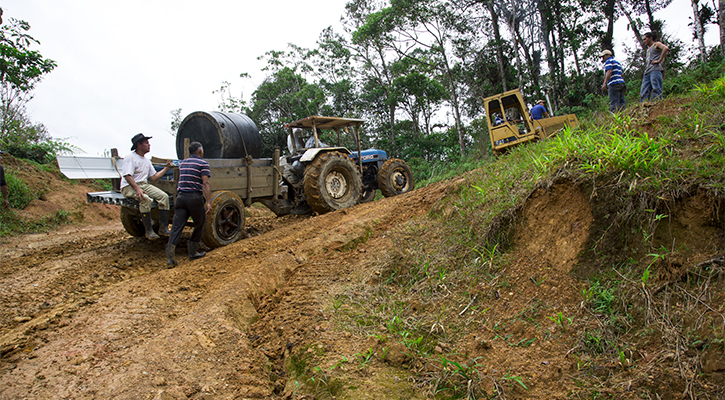 After eight hours of mostly foot-travel, the group finally reached the village of Chiquiari, where they would spend the Sabbath, before beginning construction. ‘Everyone said that was the toughest day of hiking they had ever had,’ says Dr. Gayle Wilson, one of the volunteers on the project.

But that wasn’t the end for local contact Reiner Moreno. That night he and Wilson continued another two hours up into the jungle to meet with villagers who had been requesting a visit. They began praying with them and quickly gathered a group of 42 people, eager to hear the news of the Seventh-day Sabbath and God’s plan for them. It was the first Adventist meeting ever in that remote village. 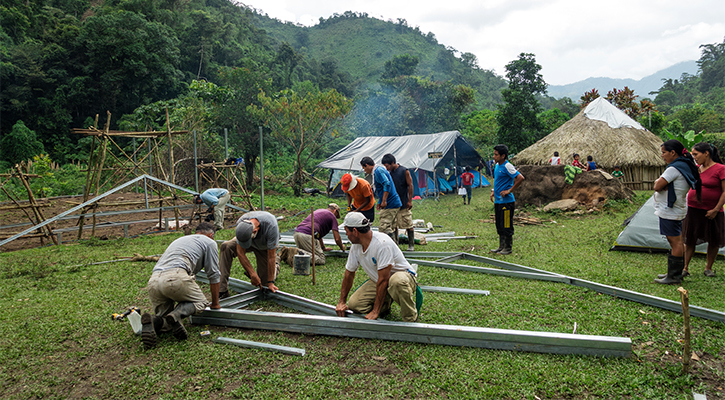 How it all Started

The story of ‘why’ is an uplifting testimony of what can happen when someone desires, hears, and follows the call of God, unquestioningly. Moreno was at a church function in Costa Rica when an indigenous man arrived to ask for money. The man’s name was Ricardo Payan, and his wife was in the hospital about to deliver their baby. The church took up a collection for the family. As Payan waited there, Moreno chatted with him about his home in the region of Chirripó, an eight-mile walk from the town. He also began to present the Adventist message, beginning with Genesis 1:1 and the story of creation. Moreno showed him God’s plan for man to rest on the Sabbath, and Payan exclaimed, ‘I want an Adventist Church in my community!’

‘In the space of three and a half hours we talked about what the Adventist Church was and God’s plan for all human beings. And how we are waiting as directed by the Word and the second coming of Jesus,’ tells Moreno.

The two made an agreement that Payan would walk to a phone and call him in about a month. On January 8, 2012, Payan kept his promise and called Moreno, still excited about the Adventist message and still eager to share it with his people. So in March, Moreno and two Bible workers hiked eight hours into the jungle to share the Adventist message with the Cabecar people for the first time ever. He was shocked to find a large group waiting in a round hut with crude benches, ready for the meeting. 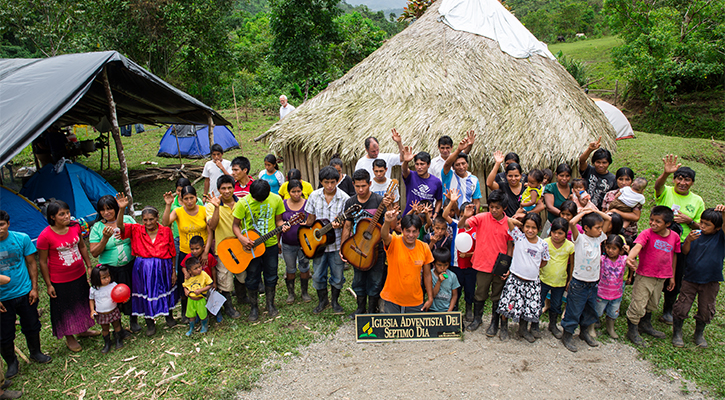 In faith Moreno moved his family to the nearest town outside the reserve, with no funds and no plan. He immediately started evangelizing the town of Grano de Oro and began Bible studies with 49 people in his first week there. More and more indigenous communities began to request a visit from Moreno, the Sabbath man. Just a few months ago, 11 villages requested Bible studies. By the time the Marantha volunteers arrived in August, that number had grown to 17 villages.

Moreno now spends many hours hiking to remote settlements every weekend. ‘We are joyful to do this work that God has given to us,’ he says of the long grueling hikes. ‘But also, there is so much work to be done.’ Moreno is the principal contact for thousands of people who have never heard the Adventist message but who so dearly want to know it!

‘It’s not just putting up churches. It’s not just a different day of worship. It is a whole way of life,’ says Wilson.
‘There is such a need to have a church,’ says Moreno, who is thrilled with the two churches Maranatha helped provide in the region. ‘Just as there is a need to have workers who are also working in these communities, teaching the love of God, step by step.’ 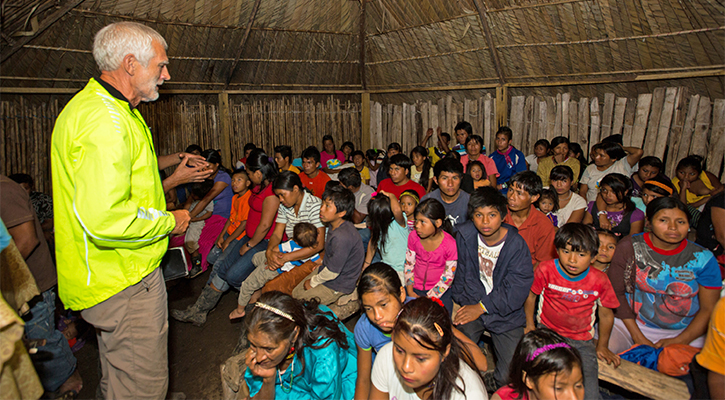 The second village of Bloriñak just received a church as well, all because of a horse! Moreno was hauling a load of donated materials up to the school in Bloriñak, and he inquired for someone with a horse that would be willing to help him. That is how he met Silverio Aguilar, horse owner and spiritual leader for the Bloriñak village.

Aguilar had distanced himself from other ministers in the Chirripó area, turned off by their drunken and immoral behavior. He had been leading his own people independently. As they wound up the mountainous trails, Moreno began to explain Adventist beliefs, starting with the creation of the world. Aguilar was immediately drawn in. He begged Moreno to come share with his village. Just weeks later, most of the village is meeting in the One-Day Church just built there, drinking in God’s truth. 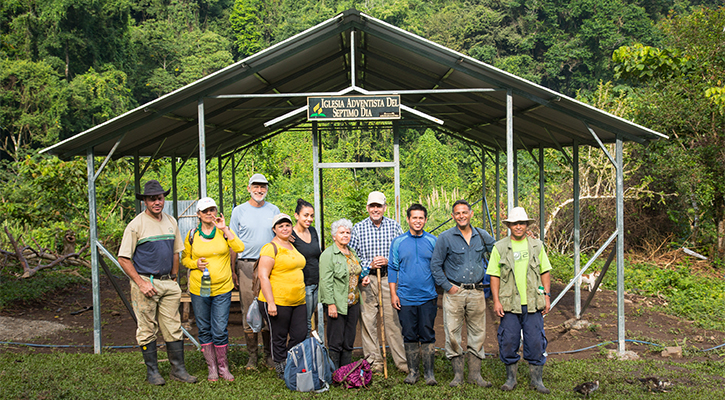 The world needs more people like Moreno. He himself begs for more people to help spread God’s Word. He believes that these remote regions may be among the last places we must reach before Christ can return to take us Home. ‘Brothers and sisters, we really, really need your support!’ he says.

The Holy Spirit is working fast in the Chirripó region. The two new churches are already full, and they are ready for more! Your support of Maranatha powers solutions like this one. Thank you for supporting Maranatha’s mission around the world. 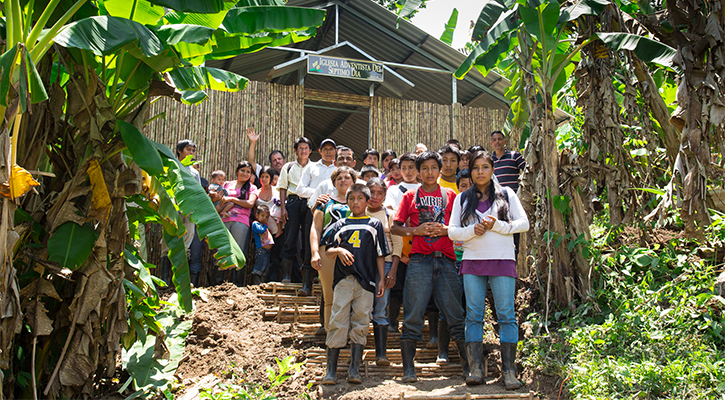