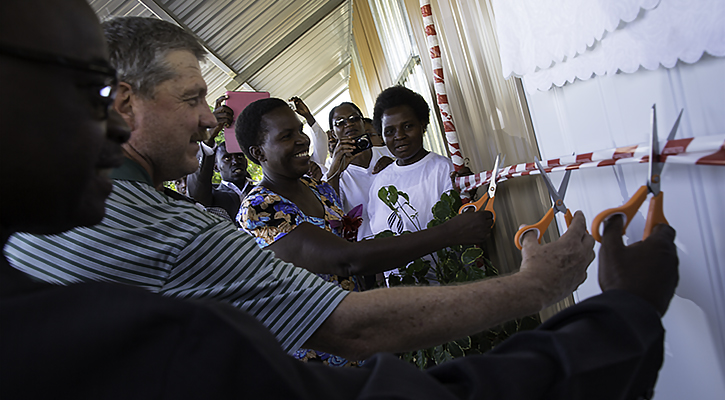 On March 25, 2015, Maranatha Volunteers International celebrated the ribbon-cutting ceremony of the new Mavuluma Seventh-day Adventist Primary School in Katimo Mulilo, Namibia. Hundreds of people, including regional leadership from the Adventist Church and the city, participated in the festivities and expressed gratitude and support for the new campus.During the ceremony, Jost Kawana, deputy director in the regional directorate of education, addressed the need for more schools. ‘We have 20 schools in the Katima circuit and over 12,000 learners. We are forced to have the platoon system whereby some learners are compelled to come to class in the afternoon. This donation is very important as it will address the higher learning enrollment challenge we face.’Kawana Ignatius Nkunga, special advisor to the Zambezi regional governor, voiced his support for the school, saying that the ‘the government encourages the establishment of private schools for more children to have access to education. When churches do this, it’s a step in the right direction. This school will cater for the values missing in secular schools.’The new school is on the property of the Mavuluma Adventist Church, which operates a daycare and preschool in the church building. More than 100 children, ages 0-6, gather for classes in the sanctuary and adjacent rooms, five days a week. The congregation started the program six years ago, with just 11 children. The goal has always been to grow the program into a school, but despite numerous fundraisers, finances were a challenge.In 2013, church leaders requested assistance from Maranatha in building a school. In March 2015, volunteers arrived in Katima Mulilo and constructed the 12-building, One-Day School campus in just seven days. Additionally, volunteers organized multiple health education seminars in the surrounding neighborhoods.The Mavuluma school is the only Adventist school in Namibia, and it represents a revival of Adventist education in the country. Decades ago, the Adventist Church in Namibia operated 13 schools, with the first being established in 1920. But by 1943, the schools were taken over by the government due to mismanagement and insufficient funds.‘It’s sad. We need to start this one and resuscitate all those schools and plant several schools. Not just in this northern region but also in the south,’ said Tankiso Letseli, president of the Adventist Church in southern Africa. ‘We believe that when there is a school, there is a center of influence. So if you remove schools, how do you expect to do evangelism?’Letseli said he hoped the opening of the Mavuluma school would inspire and ignite change for Adventist education in Namibia. ‘I take this as the beginning of great things … this should be the promise for the other schools.’For Masene Peggy, who taught at the preschool for several years, the school is an answer to prayer. ‘Today’s handing over of the structures was so wonderful. It was so exciting,’ said Peggy. ‘We thank God for what He has done for us … we appreciate it.’Namibia has an estimated 18,000 Adventists. The majority—about 80 percent—reside in the Caprivi Strip or Zambezi Region, where Katima Mulilo is located.