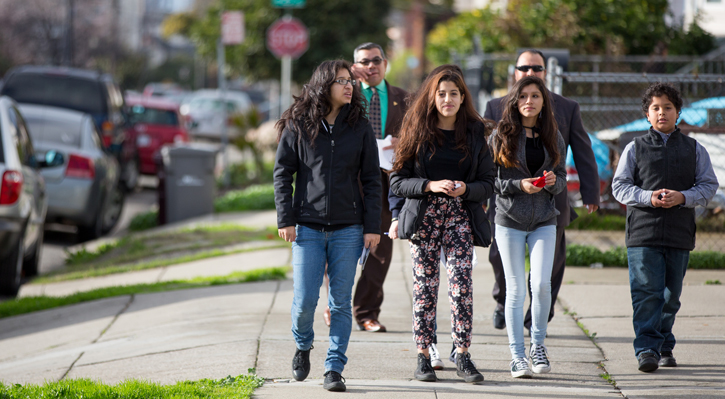 On a cool Sabbath afternoon in January, an unusual scene was unfolding on the streets of Oakland, California. Teenagers, clustered in small groups, were walking from door to door with clipboards. They weren’t selling chocolate bars or wrapping paper for a school fundraiser.

They were just asking questions. Lots of questions.

“We would grab people off the street and ask them if they had time for a quick survey. We’d ask them about improvements they would make in a neighborhood for the children… or if there was any kind of service—what they would want done in the neighborhood,” says Alex Martin, a member of the Gracepoint Adventist Church in Rocklin.

The questionnaire was part of an outreach event called Fusion/Jump Start, organized by the Seventh-day Adventist Church in Northern California and Maranatha Volunteers International, on January 23 and 24. The day started with more than 300 teenagers from all over Northern California, gathering in Oakland for Fusion, a conference-sponsored youth rally focused on service. Fellow teenagers shared testimonies of how their lives have been impacted by service while on Maranatha mission trips.

“I really liked it. It was directed for young people. So, usually in sermons you get bored. But I was on edge, and I wanted to see what else they had to say,” says Ruby Urena, a member of the Oakland Spanish Adventist Church. “I definitely want to go on a mission trip after hearing testimonies, because it’s really motivational.”

Following the worship program and lunch, everyone was invited to help conduct the survey, which was designed to help local churches understand urgent needs in their community. The outreach was part of Jump Start, the service component of the weekend, coordinated by Maranatha.

Martin was among the 200 teens that stayed for the afternoon outreach. While the idea of knocking on random doors was daunting at first, he said it was ultimately a rewarding experience.

“At first I was a little nervous, going up to strangers and asking them questions, but you kind of get into it. It’s a really cool experience, talking—witnessing really—to people you don’t know, and you know you’re helping and you’re making a difference,” says Martin.

The survey was just the beginning of a weekend packed with service. After a campout in the gymnasium of Golden Gate Academy, nearly 100 teens jumped into a variety of mission projects in Oakland on Sunday. Volunteers broke into teams to paint the interior of Elmhurst Adventist Church, landscape Golden Gate Academy, serve food at a homeless shelter for the elderly, and pick up trash in a neighborhood surrounding the Oakland Spanish Adventist Church.

Another outreach activity was a dental clinic at a homeless youth center called Covenant House. Working with the Adventist ministry Caring Hands, a group of Northern California dentists saw nearly 50 patients. Patients came from all over Oakland, including Covenant House. For many, it was their first time seeing a dentist.

“I’m really impressed. The graciousness, the kindness. I know that the woman who was registering, who sat next to me, said that she had not been to a dentist in 20 years. So I thought, ‘Oh thank God! I’m not the only one!’ Because I haven’t been to the dentist in 20 years. So when I saw this, this was my opportunity to at least get my teeth clean. They look so pretty!” said Ester Parker, who saw a flier about the clinic at her senior facility.

“It is so exciting to have young people who are willing and wanting to get in here and help us here in the city. It brings energy, it brings a lot of good ideas, of course they work hard, but it’s also inspiring to see young people who are actually working for the Lord on behalf of the kingdom… It’s really inspiring to see that,” says Marc Woodson, executive secretary of the Adventist Church in Northern California. Woodson is also the director of “Bridges: Bay Area for Jesus,” a Northern California and Central California Church initiative to reach the greater San Francisco Bay Area. One of the goals is to help the Oakland churches and community through outreach programs, evangelistic meetings, and church plants. There are more than 413,000 residents in Oakland.

“Our goal is to really have a greater Adventist presence, a Seventh-day Adventist Church presence in the city of Oakland. Right now we have five churches. We think we should have two to three times that number of churches to really reach some of the needs that are here in the city and let this city know that God cares about the residents of the city,” says Woodson.

But the service projects did more than help the churches, schools, and surrounding neighborhoods. It also sparked a new sense of community among the participating youth groups.

Erin O’Conner Ngeno is the director of the reorganization committee leading the effort to reopen Golden Gate Academy, which was a K-12 Adventist school for 82 years. After closing its doors in 2005, the school is hoping to reopen in a few years. The precise date depends on a number of factors, including the completion of major renovations–with which Maranatha will assist. Over the weekend, volunteers tore out old lawn and overgrown shrubs and planted new trees on campus while clearing out old ones. Maranatha has already scheduled a second project at Golden Gate Academy in June.

As the base camp for the weekend’s volunteers, Golden Gate Academy welcomed a lot of teens—a scene that has been rare for the past several years. On Saturday night, the gymnasium was packed with young people playing volleyball, basketball, and other games.

“We’ve got this beautiful location here in the Oakland hills. And it’s so sad to see our Adventist kids aren’t benefitting from it. We’ve got this enormous asset. And so to see a hundred young people, here, on our campus, thriving–it’s just a beautiful sight,” says Ngeno.

“[This event] is energizing Golden Gate Academy in a way that I can’t truly express,” says Ngeno. “We have six churches in our constituency, and five—right here in Oakland. And it’s so difficult to bring all the churches together because people get busy with their lives and their ministries. And it’s not often that we come together. So when Jump Start came, and they demonstrated that spirit of unity and love, and they were playing in the gymnasium that we have on campus… we sat together and said, ‘We should be doing this on Saturday nights!’ So it’s bigger than just helping Golden Gate. It’s really infused a new enthusiasm between our church membership to come together more often and to do projects like this. We’re just so grateful for what Maranatha ministries is doing here on our campus.”