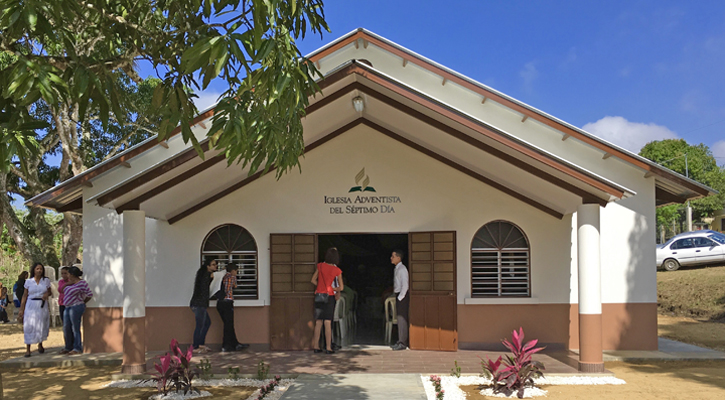 On Sabbath, March 10, Maranatha Volunteers International was in the Dominican Republic for the dedication of the El Quemado Seventh-day Adventist Church. Hundreds of people filled the beautiful new sanctuary, and 12 people were baptized during the program.

The El Quemado congregation is relatively new; the members have been Adventist for only a few years. The group came together as a result of an evangelism campaign in the neighborhood. A Bible worker came to work with the new believers, but with no other Adventist presence in the area, there was no church.

Without a designated place of worship, the group met in the patio of a member’s home.

Then, El Quemado was placed on a list to receive Maranatha’s assistance. In 2017, two volunteer groups came to El Quemado to build the new church.

The building is already drawing new people to worship, and the congregation kicked off another evangelism campaign, immediately following the dedication.

Earlier this year, the Adventist Church in the Dominican Republic celebrated the 100th anniversary of the church. At a special program for the country’s first Adventist church, which was built in 1917, church leaders said that the Dominican Republic has constructed an average of 30-35 churches annually in the past decade; many of the churches were built in partnership with Maranatha. Overall, Maranatha has built more than 175 churches in the country.

When Maranatha began working in the Dominican Republic, Adventist membership was at 20,000 people. Today, there are more than 330,000 members worshipping in 1,338 churches across the country.