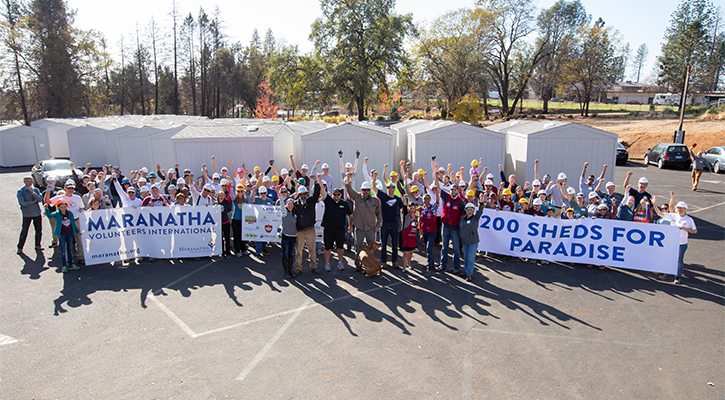 In November, Maranatha Volunteers International and the Paradise Seventh-day Adventist Church celebrated the completion of an ambitious community outreach project. In just three weeks of intense activity, volunteers constructed 202–surpassing the initial goal of 200–storage sheds for survivors of the Camp Fire, a devastating wildfire that destroyed the town of Paradise in 2018.

“It is a real sense of blessing to see what so many dedicated volunteers were able to accomplish in less than the original time allotted for this project.  Each shed represents hope and a measure of love delivered to people that have experienced so much loss this past year,” said David Woods, director of North America Projects for Maranatha and construction coordinator for the project in Paradise.

The shed project, as it came to be called, was a joint effort between Maranatha and Love Paradise, an outreach organization of the Paradise church. The idea came about in early September, when Joelle Chinnock, director of development and disaster recovery for Love Paradise, heard about the need for safe, dry storage sheds for the 2,000 plus people who had moved back onto their properties in Paradise. Most of the residents are living in trailers with no place to store their personal belongings. In one situation, a woman on dialysis was having to store her medical supplies outside in cardboard boxes. 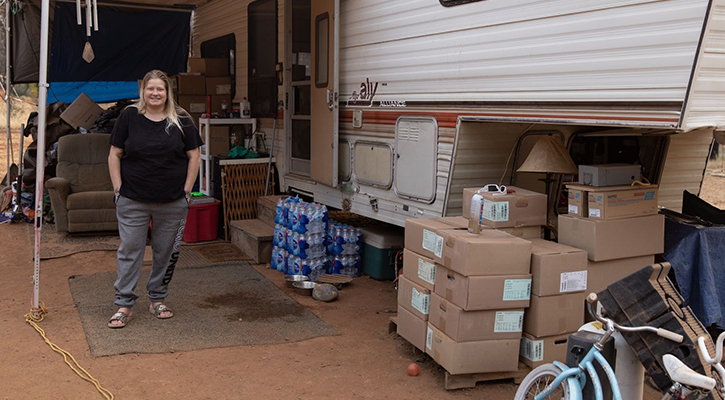 “I was thinking, let’s build a couple [sheds] in our parking lot, and get our local contractors, and some church members, and we’ll be done. But Garrison [Chaffee] remembered that Maranatha had stepped out right after the fire and called our church and said, ‘What can we come up and do?’” says Chinnock. Chaffee is the associate and youth pastor for the Paradise church and director of Love Paradise. “So he put two and two together and made the call, and Maranatha was on board. They came up within a day or two of that phone call, and we met in the parking lot. And it was all thumbs up from there.” 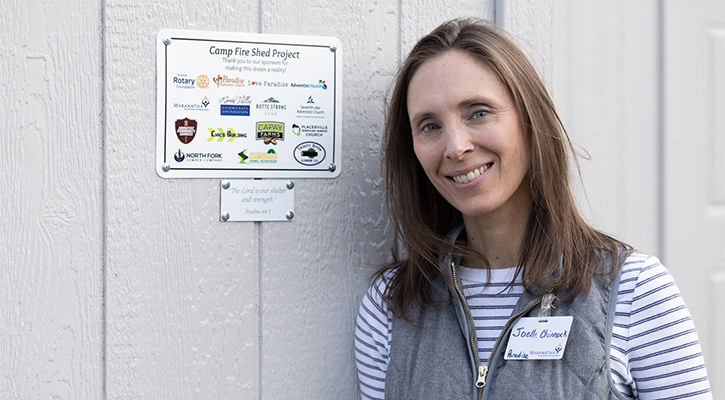 The two organizations set the goal at 200 sheds with a project scheduled to begin in November in hopes of providing the sheds before the start of the rainy season. Over the next eight weeks Love Paradise rushed to secure funding from a variety of charities, corporations, and local businesses. They also worked with local leadership in Paradise to create an application process for recipients of the shed. In the meantime, Maranatha designed a shed, developed a construction plan, and recruited volunteers. Leadership also determined lodging for the volunteers–no easy feat given that Paradise is still essentially a disaster zone. Few places have running water or electricity. An attitude of flexibility would be a must, along with quite a few generators.

On November 5, 2019, volunteers from all over the United States began arriving in Paradise. Participants parked their trailers at Paradise Adventist Academy–which has been closed since the fire after suffering partial damage–or camped out on cots in the classrooms. The Adventist Church in Northern California loaned the project a portable shower trailer. Two classrooms were converted into a kitchen and dining hall. Multiple generators were borrowed or purchased to power construction tools, kitchen appliances, and lights for the volunteers.

Across the street from campus, Maranatha established a construction site in the parking lot of the Paradise Adventist Church, which was destroyed in the Camp Fire, setting up an assembly line with stations for the base, walls, roof, and paint for each 10 by 12 foot shed.

The next day, the project was off and running with approximately 80 volunteers and less than 100 applicants for sheds. Thanks to several reports on the project from local newspapers and news outlets, more than 100 volunteers arrived by the weekend. The number of applicants also began to soar. 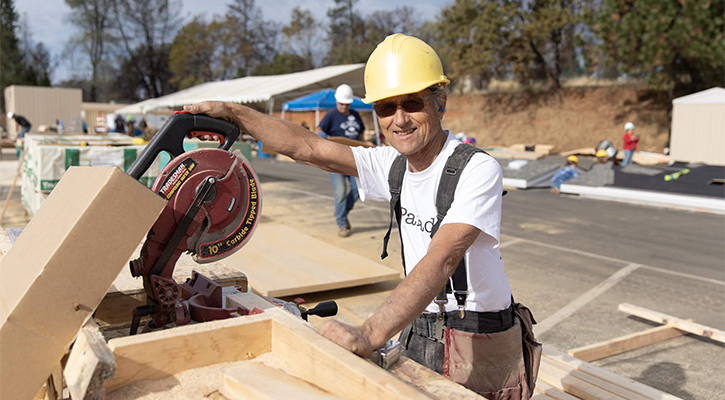 “Shortly after the first shed was built the word spread through town immediately,” says Kyle Fiess, vice president of projects for Maranatha. “Everybody was aware that the Paradise Seventh-day Adventist Church was building sheds and giving them away. The media attention spread the news throughout Northern California and pretty soon we had volunteers showing up to help from two to three hours away. Some of these people had never heard of Maranatha or were not familiar with the Adventist Church. And we used that opportunity to make friends with a large group of people that we would have never met otherwise.”

In total, 377 volunteers participated in the project, including several survivors of the Camp Fire who also lost their homes. Americorps, a federal service organization for 18-24 year olds, sent a team of volunteers. Several members of Cal Fire spent a few days at the project. The neighborhood Lowes Home Improvement store not only offered discounts for materials, but employees came by on multiple days with pastries, warm drinks, and gratitude for the volunteers.

By the end of the second week of the project, Love Paradise started delivering the first batch of sheds, thanks to the generosity of several organizations. With each shed weighing 2,500 pounds, delivery is not a quick process. But it is certainly a joyful one–full of gratitude from the recipients.

“This shed means space, a little bit of freedom inside of my little trailer, a little bit of normalcy. I’ve been thinking all night long about what I’m going to put in it, stock in it. It really does mean a lot and I’m really grateful to everybody who’s helped put this together–the volunteers that have come from far and wide, out of state, that have helped build them and the volunteers that are bringing them and delivering them,” says shed recipient Andrea Hitt, a Paradise resident who lost her home in the fire. “We’re very grateful to Seventh-day Adventists and everybody that’s helped put this together.” 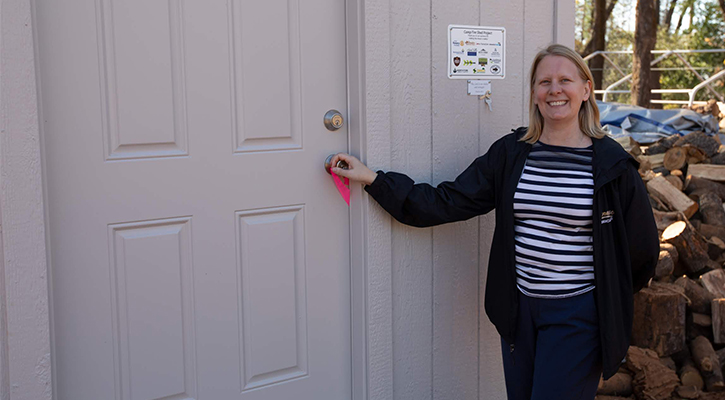 “This project was unique for us in many ways, but ultimately it was special because we had an opportunity to make a huge difference in the lives of more than 200 families who are hurting. At every delivery we hear a story of why the shed is so important to the recipient. And every story makes you realize how desperately needed these sheds were. So we are grateful that we were able to help make this project a reality,” says Fiess.

To date, more than 700 people have applied to receive the sheds. By early December, nearly 90 sheds had been delivered to individual properties. Deliveries will continue throughout the month, thanks to local organizations and individuals volunteering their time.

Maranatha Volunteers International, based in Roseville, California, is a non-profit, Christian organization that organizes volunteers to build churches, schools, and water wells around the world. Established in 1969, Maranatha has constructed more than 11,000 structures in nearly 90 countries and mobilized more than 85,000 volunteers.