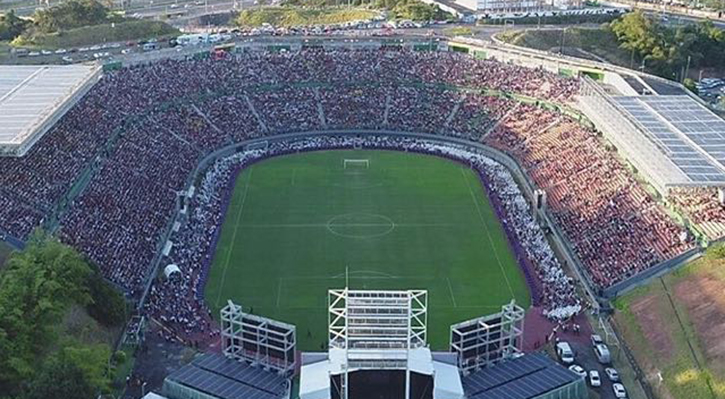 On September 29, 2018, Maranatha Volunteers International leadership participated in ‘Tempo de Celebrar’ in Salvador, Brazil. More than 35,000 gathered at a soccer stadium to celebrate the completion of ‘Santuários de Esperança,’ a five-year church-planting campaign by the Seventh-day Adventist Church in east Brazil. Over this timespan, 1,000 churches were built, including more than 400 by Maranatha.

‘When Brazil first asked Maranatha to be a major part of this aggressive project, right away we knew we could help make this a successful undertaking,’ says Don Noble, president of Maranatha. ‘This is why Maranatha exists.’

Before the program launched in 2013, Geovani Queiroz, president of the Adventist Church in east Brazil, identified 1,000 principal towns in the region with no Adventist presence. Missionaries were designated to support the growth of each congregation and a strategic partnership with Maranatha was formed.

”Santuários de Esperança’ was a bold attempt at spreading the Gospel to unreached areas in Brazil,’ says Kyle Fiess, Maranatha’s vice president of projects. ‘We were pleased that the construction of churches was seen as an important part of the evangelism process, and we were happy to participate in helping make those churches a reality. These 1,000 congregations are now equipped to grow in a sustainable way and will undoubtedly be the foundation for rapid growth in the years to come.’

During the Saturday evening program, Maranatha was honored, and Noble addressed the crowd. ‘It was impressive to see so many people gathered to express their support for this endeavor,’ says Noble. ‘They realized the great significance of these churches for the growth of God’s kingdom in their area of the world.’

The event also featured performances from Grammy-nominated singer Wintley Phipps, a message from evangelist Mark Finley, and nearly 800 baptisms. All of this to celebrate an accomplishment that was not guaranteed at the outset.

‘A lot of people thought 1,000 churches in five years in a union was crazy,’ says Elmer Barbosa, Maranatha’s country director for Brazil. ‘But having an organization like Maranatha support the campaign was the encouragement they needed to continue with this dream. And looking back, it’s not such a crazy dream anymore.’

Maranatha has been working in Brazil since the 1970s and has constructed 988 churches in the country with help from 921 volunteers.