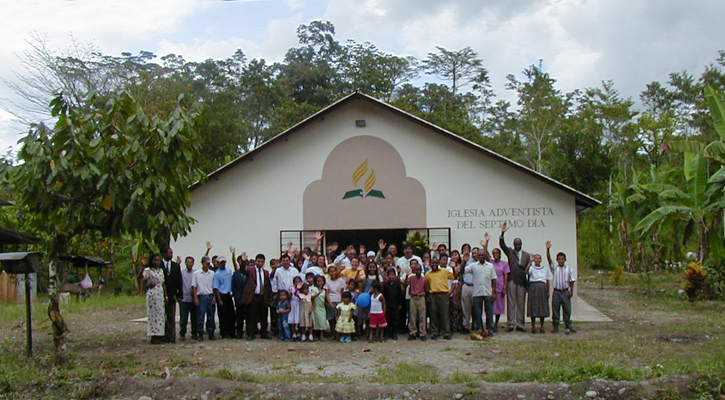 Sixteen years ago, the Suretka Seventh-day Adventist congregation was busy outgrowing their tiny wooden church. They needed a larger place of worship for their rapidly increasing membership.

Today, they’re busy moving people out. Since Maranatha Volunteers International built a large church for Suretka in 2001, three daughter congregations have already grown out of the original group, along with a granddaughter church.

In 1996, the Seventh-day Adventist Church in Costa Rica presented Maranatha with a request for churches and schools. There was an urgent need in the country, and the hope was that the new buildings would not only provide places of worship and education, it would also serve as a catalyst for membership growth.

After assessing the need, Maranatha made a plan to construct 26 new churches and eight schools in Costa Rica. Crews entered the country in August 2000, and the first volunteer group arrived that December. Over the next year, more than 1,400 volunteers traveled to Costa Rica to work on the projects.

Suretka was among the 26 candidates to receive a sanctuary. Since then, the congregation has continued to grow–to the point where they have been responsible for the establishment of several new church groups.

The first daughter church came in 2004, when 27 members branched off from Suretka to form the La Pera congregation. Today there are 43 members at La Pera; they meet in a structure made from woven palm leaves and bamboo. Despite their humble space, La Pera successfully planted their own daughter church, Santa Fe, in 2015.

In 2014, Suretka had their second daughter church. Twenty-three members branched off to form the Surie Church. Then the next year, another 18 members left Suretka to start a group in Corbita.

Overall, Adventist membership in Costa Rica has more than doubled since Maranatha first worked in the country. In 2000, Luis Gonzales, then president of the Adventist Church in Costa Rica, reported a membership of 34,000 people and 130 churches. Today, Costa Rica is home to more than 73,000 Adventists and 238 churches.

Since the effort in 2000-2001, Maranatha has returned to Costa Rica for special projects. One of the most memorable mission trips was in 2014, when Maranatha built two churches in the dense forests of the Talamanca mountain range, in the Chirripó region. All the building materials–and food and supplies for the workers–had to be carried to the construction sites by hand. In 2017, Maranatha is scheduled to complete a few projects in Costa Rica, including a One-Day Church structure for La Pera.