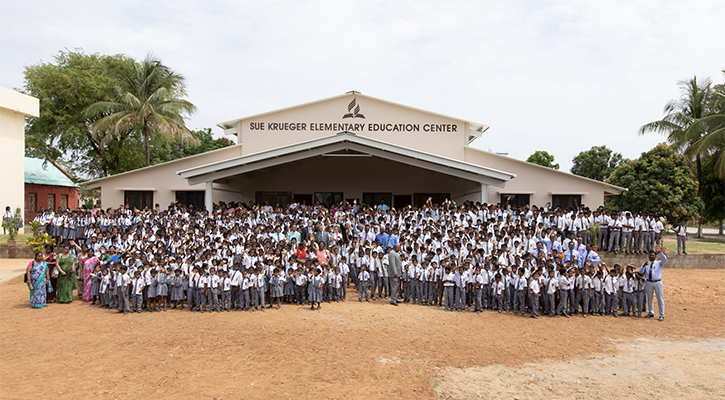 One year after breaking ground at the Khunti Seventh-day Adventist School in India, the large 12-classroom Elementary Education Center (EEC) on campus is complete. The school has an enrollment of 1,300 but is forced to turn away hundreds of children each year due to lack of space. Classrooms are crowded, elementary grades are scattered throughout campus, and there is no space large enough for the entire school to assemble. Deteriorating buildings are also a deterrent for existing and prospective families.

The new structure will allow elementary grades to be housed together in bright classrooms with a central meeting space for assemblies. With more space, the school will be able to take more children next year. Although it is a Christian campus in a majority Hindu region, the Khunti school is regarded with distinction in the community. As one of the only English-speaking schools in the area, families are eager for their children attend Khunti, where they also learn about Jesus and the Bible.

The building was made possible, in part, by a generous gift from the Krueger family in memory of Sue Krueger. Sue, a longtime volunteer and supporter of Maranatha, had a passion for education and a special affinity for India, and the EEC is named in her honor.

The new Khunti building is the 116th EEC Maranatha has built around the world. These substantial structures are unique because every square foot is usable space. With no internal hallways, a central open area is surrounded by classrooms. During the week, the open area accommodates assemblies and chapels; on Sabbath, the space can be used for church.