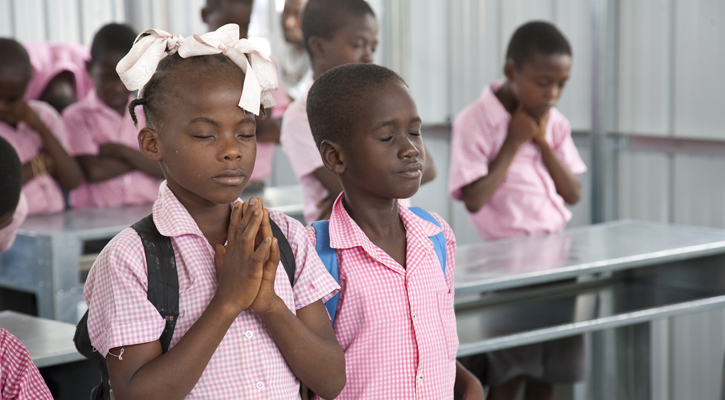 Last week, Hurricane Matthew made landfall in Haiti, ripping through the southwestern edge of the country and destroying everything in its path. An estimated 1,000 people have died and countless structures demolished.

Concerned volunteers and donors have asked what Maranatha will be doing for Haiti and other regions impacted by the storm. At this point in time, Maranatha will not be involved in relief efforts for any of the countries impacted by the hurricane as we are not a disaster relief organization. In these first few weeks following a natural disaster, affected areas need basic care and supplies. Organizations, like ADRA and others, are first responders.

In 2010, soon after the Haiti earthquake, Maranatha responded to the Seventh-day Adventist Church’s request for One-Day structures to serve as shelters. Now, those structures are being used as churches and schools in Haiti. Most of these One-Day buildings were located away from the areas of major damage and suffered little to no damage from the storm.

Hurricane Matthew also tore through the eastern tip of Cuba, pounding the town of Baracoa with intense wind and rain. There has been significant devastation to the town, but there have been no reported deaths.  Maranatha constructed a church in Baracoa in 1999; the Seventh-day Adventist Church in Cuba reports that the church structure was unaffected; it served as a shelter during and after the storm.

“We are so thankful that this church building was able to shelter so many people in the surrounding community,” said Aldo Perez, president of the Adventist Church in Cuba, in an article published on the Inter-American Division website.

In the United States, the powerful storm impacted Florida, Georgia, and South and North Carolina. Maranatha volunteers on the Aiken Adventist Church construction project, in western South Carolina, were on the fringes of the hurricane as it passed through the eastern part of the state. Work stopped until the heavy rain passed.

When the timing is appropriate for what we can provide, Maranatha is prepared to discuss how we can help. For now, please continue to pray for the thousands of lives impacted by the hurricane.

Read a news article, from the Seventh-day Adventist Church in the Caribbean region, about Hurricane Matthew’s impact.