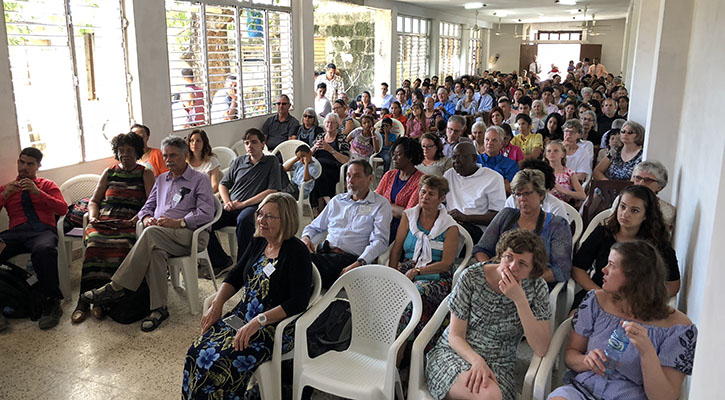 A group of 42 Maranatha volunteers recently returned from a project at the Seventh-day Adventist church in San Antonio de los Baños, Cuba. This congregation began in a woman’s home and continued to meet there for 45 years! Before she died, she asked that her home continue to serve as a place of worship. Over time, the church began acquiring adjacent properties to expand the space to make room for the growing congregation. Today, there are more than 200 members of the San Antonio group, but not enough room to seat everyone inside the existing church. On Sabbath, members are spread out amongst five houses throughout the city.

Last year, Adventist leadership in Cuba asked Maranatha to help San Antonio by renovating their church. Maranatha responded to the call, and in April, a group arrived in Cuba for an 11-day project. Volunteers started demolition of a house next to the church that will expand its square footage. Walls received fresh paint and the group also held a medical fair and sports ministry for local youth. New soccer balls and baseballs provided excitement among the kids, and goodwill in the community.

Relationships were also fostered with church membership, who took initiative to join in on the work. When they learned of Maranatha’s project, they rolled up their sleeves and helped alongside the volunteers. About 65 church members contributed on various jobs, which also provided opportunities for them to interact with the local neighbors;

“Without a doubt, this project has opened up new doors in the community,” noted David Lopez, Director of Volunteer Projects. “They are using this project to push forward with the work and continue sharing the name of Jesus in Cuba.”

Maranatha has been working in Cuba to renovate Seventh-day Adventist churches since the 1990s. Political circumstances make work in Cuba complicated, and projects can take years to get off the ground and completed. But Maranatha has been successful in renovating hundreds of churches in Cuba and even building an Adventist seminary.