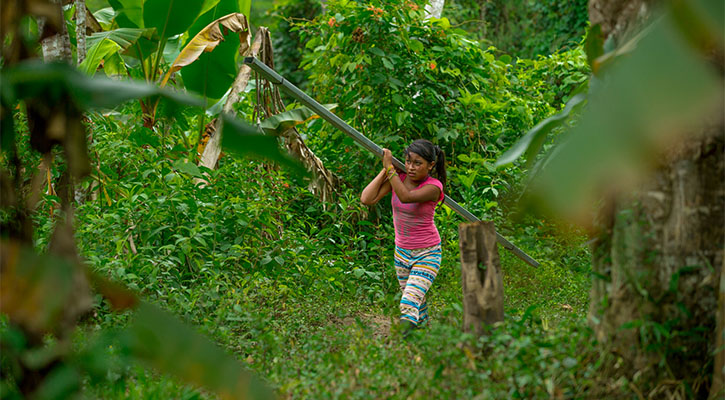 Maranatha embarked on one of our most adventurous projects to date: building two One-Day Churches in the eastern mountains of Costa Rica, in the Chirripo region. In August, a small crew of volunteers, which included four from the United States and several local church members, trekked through the jungle (some several times), carrying food, water, equipment, and the steel frame of a One-Day Church. Most of the 16-mile journey was completed with the aid of a tractor. But once the road ended, the team hiked the rest of the journey through mud, thick jungle, and steep inclines. It was a trip that took 11 hours at an elevation that peaked at 4,400 feet above sea level.

The arduous trip was well worth it. Over the next 10 days, the volunteer team camped in the jungle to build two One-Day Churches for existing Seventh-day Adventist congregations.

The first church was built in the village of Chiquiri, where there are about 30 people meeting. This group was established two years ago by a local Bible worker.

The second church was constructed in Bloriñak, a village located a few miles from Chiquiri. This group used to meet in an extension that was built on the back of a church leader’s home.

The remote location of these villages would have made it nearly impossible for traditional church construction to take place. These indigenous groups are a day’s walk and bus ride from the nearest city. But the simplicity of the One-Day Church has made it possible for Maranatha to build a church on the mountaintop.

There are numerous indigenous groups that are meeting in this region of Costa Rica, and all of them need a church. Currently, Maranatha is discussing the possibility of returning to the area for further projects.