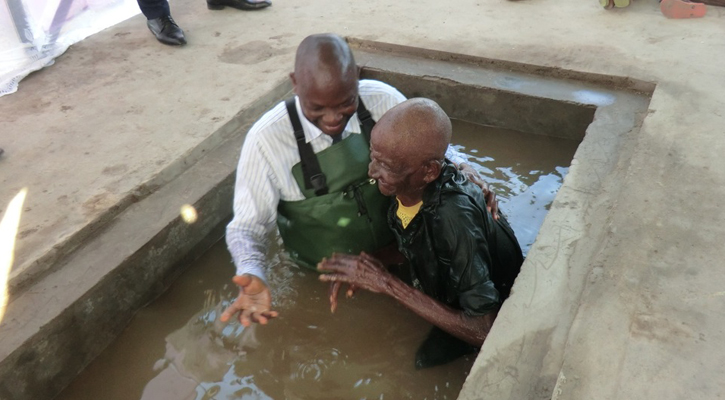 It’s been a little over a year since Maranatha began work in Angola. Since then, Maranatha has constructed 160 One-Day Church kits for Seventh-day Adventist congregations in Luanda.

At the Maria Tereza Church, recently built by Maranatha crews, the congregation has yet to put up walls on the One-Day Church frame. But they did create a baptistery, and in early December they dedicated the new church with eight baptisms. One of the people baptized was 90 years old.

Most recently, Maranatha began construction in the southwestern part of Angola. Up until now, church construction was focused in the northeast part of the country.

Places of worship are scarce in Angola. Many churches were destroyed during the country’s decades of civil war, leaving only rubble. Congregations are forced to meet under trees or in vacant lots on Sabbath. Yet the Adventist Church is thriving in Angola with more than 400,000 members. So the need for church buildings continues to grow.

Your donations are needed to fund more churches and schools in Angola. Donate online at www.maranatha.org or call us at (916) 774-7700. Thank you!